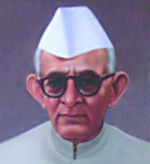 Kanaiyalal Maneklal Munshi popularly known as Kulpati Dr. KM Munshi founded Bharatiya Vidya Bhavan in 1938. He was very popular in Gujarathi Literature, also a politician freedom fighter a lawyer and a writer. He was a member of constituent assembly of India, Member of Parliament, Minister for Agriculture and Food, Governor of Uttar Pradesh etc. He initiated Vanamahothsav in 1950. Munshiji was a great follower of Mahatma Gandhi.

Bharatiya Vidya Bhavan Valanchery was established in the year 1999. The school is co-educational and medium of instruction is English. The school is affiliated to CBSE New Delhi and has classes up to Standard X.

The goal of the school is to create ideal citizens, individual who fulfill their interests and interest of the society simultaneously. We aim at empowering language skills through communicative approach and effective curriculam transaction.  We also aim at curriculum enrichment through frontline curriculum approach and building a strong foundation to higher education.

The enrolment will be generally 40 per section. Admissions are made on the basis of tests which will be held in April. Tests will be held in English, Hindi, Maths, General knowledge, General Science and Social Studies..... Read more